Relive classic Star Wars moments as you build this exceptionally detailed R2-D2 LEGO droid figure. The brilliant new-for-May-2021 design is packed with authentic details, including a retractable mid-leg, rotating head, opening and extendable front hatches, a periscope that can be pulled up and turned, and Luke Skywalker’s lightsaber hidden in a compartment in the head..

As far as droids go, it’s fair to say that one of the most famous, and well-loved is R2-D2. From the minute he graced our screens in the first Star Wars movie back in 1977, R2 (as we lovingly call him) quickly became a fan favourite.

When LEGO released their first-ever Star Wars themed set back in 1999 (7140 X-Wing Fighter), R2 was there right from the beginning.

That same year he also appeared in the 7141 Naboo Fighter and 7171 Mos Espa Podrace sets, so clearly LEGO, in their infinite wisdom, knew this was a minifigure that the masses wanted.

2002 saw the release of a LEGO Technic version of R2-D2 (8009 Technic R2-D2). It looked a little odd and, dare we say, naked, akin to C-3PO in The Phantom Menace, but it was an interesting take of R2’s form factor in the Technic style, something that LEGO would soon take advantage of.

In 2012, LEGO ramped up our R2 addiction further with the release of the 10225 Ultimate Collector Series R2-D2. The form factor was a little more blockier than the most recent set (which we will come to in just a minute), but in essence, it was our first true, scaled-up LEGO R2 with accurate detail.

Coming in at 2127 pieces, it was the largest set for a droid that LEGO had ever made, and utilised the Technic build style.

There followed many more LEGO Star Wars sets featuring R2-D2, covering the original trilogy, the prequels and the new trio of movies. That’s not even counting all the polybags and promotional sets he also featured in.

Which brings us to July of this year, where LEGO have released an updated version, minus the ‘UCS’ branding, but with a total of 2314 pieces and most definitely an upgrade on the 2012 release.

This time around the dome is much more spherical (a design technique that is hard to master with LEGO). Curved build styles together with the grey and blue brick patterns, help to cheat that rounded look. Detailing is definitely they keyword with this set as there is so much of it – especially on the dome, where R2’s visual components are given an upgrade, both front and back. Hidden within the dome, which rotates a full 360 degrees, is R2’s periscope, which can be rotated into a locked position. There’s also another hidden compartment that lifts out to reveal Luke Skywalker’s lightsaber! 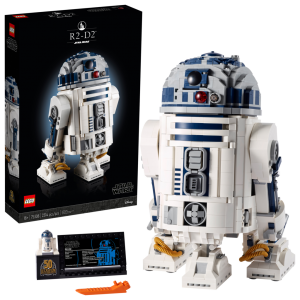 R2’s legs (all three of them) are highly detailed, from the studded grate effect at the bottom, through to the gold piping and up to the mechanic accents on the side. The mechanism inside allows his third leg (no laughing at the back) to stow away inside and then pop out (seriously, no laughing at the back), and then lock in position. There’s a bit of a knack to it as you have to lift up the two side legs and swivel the main body chassis forwards to allow the third leg to lock.

The front panel where R2 hides all his little tricks is incredibly well done. The two blue arms pull out, and likewise there are two white hatches that slide out to reveal contact tools that can be pushed forwards with the two conical levers at the back of R2.

Let’s not forget the fab display stand you also get – applying the stats sticker can be a little tricky, but once you get the alignment sorted, it’s a great finisher to this commemorative set, which also celebrates 50 years of Lucasfilm. There’s even a specially printed ’50 year’s brick which connects to the stand, as well as an R2-D2 minifigure.

The build time took around 4 hours with a great variety of build styles; from the technic aspects of the internal mechanism, to the curved accents on the legs and dome, along with the more finite detailing utilising smaller brick pieces, it all culminates in a thoroughly enjoyable build.

Hands-down, this is the ultimate set to celebrate our favourite astromech droid! 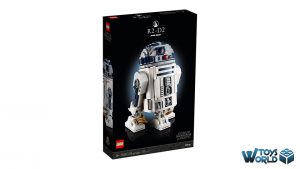 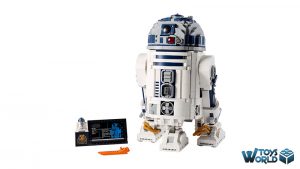 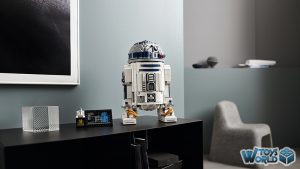 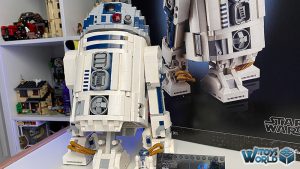 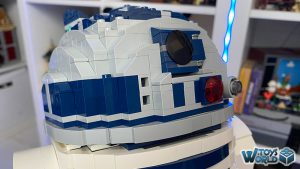 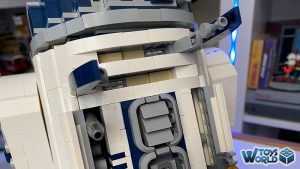