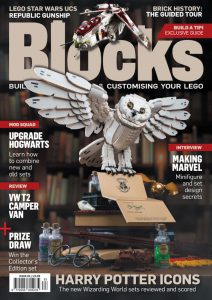 Blocks magazine Issue 83 is heading deep into the Wizarding World of LEGO Harry Potter, with set reviews including 76391 Hogwarts Icons complemented by a guide to making the 2021 Hogwarts set match the other modern models.

Issue 83 is available worldwide as a single issue or as part of a subscription at www.blocksmag.com and will be in UK stores from September 2nd. Subscribe today to be in with a chance of winning 76391 Hogwarts Icons – Collectors’ Edition!

There was only one set that could take the cover spot this month. 76391 Hogwarts Icons – Collectors’ Edition is reviewed alongside other new Harry Potter sets. Mod Squad takes the new 2021 Hogwarts Castle sets and makes them match the other modern releases so you can build an epic wizarding school with a cohesive look.

It’s not all magic in the review section with other large sets put to the test too – a careful eye is cast over 10279 Volkswagen T2 Camper Van and Star Wars UCS 75309 Republic Gunship to help you decide what to splurge on.

This month’s behind-the-scenes feature is all about Marvel, as six LEGO creatives come together to reveal why The Infinity Saga sets are the best, most detailed film models yet and what it takes to put together a series of Collectible Minifigures inspired by Loki, WandaVision and the other Disney+ shows.

Warren Elsmore reveals what went into his Brick History exhibition, Simon Pickard shows how you can capture the essence of a moment in your builds and Daniel Konstanski is relieved to be back on the road visiting a LEGO convention.

There’s plenty more besides in Blocks magazine’s 116 pages, including a guide to building a tipi, tips for shooting an underwater scene, how 21056 Taj Mahal was designed, Kjeld Kirk Kristiansen’s second job and much, much more.

Blocks is giving away 76391 Hogwarts Icons – Collectors’ Edition this month! To be entered into the latest prize draw and to get Blocks magazine delivered every month – ahead of the shops – visit www.blocksmag.com and check out the money-saving subscription deals available.

Everyone who subscribes to the print edition by October 6th will be in with a chance of winning (existing subscribers will automatically be entered into the prize draw).