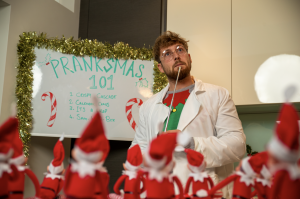 ‘Tis the season for pranking and good will… Christmas is nearly here and with it, the return of Santa’s elves causing mischief and mayhem and this year, they return with a new prankster in tow!

The Elves Behavin’ Badly are upping the ante having hired mischief-maker and reality star Sam Thompson as Chief Prankster to help spread chaos in homes and workplaces up and down the country. Known for his banter and practical jokes on long-suffering girlfriend Zara, practical joker Sam has joined the Elves Behavin’ Badly line up to inspire the nation to get pranking!

Sam, who is leading the pranking charge along with a host of celebrities, will be inspiring the nation with a festive pranking 101 to encourage people to embrace their mischievous side this festive season. Whether it’s tips on executing classic pranks such as adding festive wrap to everything in the bathroom – right down to the toothbrush – or ideas for pranking festive bakes with the addition of hot chili, Pranksmas is back with a bang!

Donning stripey tights and taking his new role seriously, the TV personality is encouraging people to unleash their inner prankster and get on Santa’s naughty list!

“Being assigned Chief Prankster for Elves Behavin’ Badly is right up my street – it’s basically my calling as everyone who knows me, knows I live for winding up anyone around me. Coming up with Pranksmas ideas with the Elves and being encouraged to cause chaos and taunt Zara for basically the whole month of December – amazing – she won’t know what’s hit her!”

One thing’s for sure, if we were Zara we would sleep with one eye open during the countdown to Christmas!

Paul Beverley, a director of the worldwide distributors for the Elves Behavin’ Badly dolls thinks this year’s campaign will bring a whole new level of mischief saying:

“This year, Elves Behavin’ Badly are upping the ante, taking pranking to a whole new level with the help of our naughty elves. Following restrictions around the festivities last year and limited household mixing, this year with the help of Sam and other familiar faces we are going all-out, and want to inspire everyone to get involved this Christmas.”

Following concerns of shortages with up to a million Elves Behavin’ Badly dolls previously stranded in China, the stock is now arriving in the UK having been flown in and the cheeky Elves will be here just in time to cause their traditional festive mayhem.

+ Check Out the Elves Behavin’ Badly website at: https://www.elvesbehavinbadly.com/