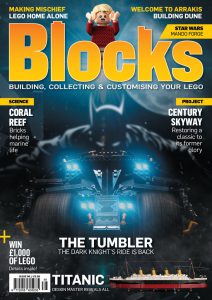 Blocks magazine is wrapping up 2021 by unwrapping the amazing LEGO sets that have launched in time for Christmas, including Batman’s new Tumbler, Titanic and Home Alone.

There’s also a special Black Friday deal from November 26th-29th (or while supplies last) at www.blocksmag.com, which will see every new print subscriber getting a free Blocks magazine back issue. Everyone who subscribes by December 23rd will also be in with a chance of winning £1,000 to spend at the LEGO Store!

Issue 86 is available worldwide as a single issue or as part of a subscription and will be in UK stores from December 2.

With the new LEGO 76240 Batmobile Tumbler taking fans back to the beloved Dark Knight Trilogy, Blocks puts it alongside the original 2014 version to see how they measure up. The Reviews section also covers new Star Wars sets, Speed Champions two packs and the epic Disney Frozen Ice Castle.

To really understand what went into making 10294 Titanic something special, Design Master Mike Psiaki discusses his design process and explains that sometimes a model simply has to be two metres long. There’s also the inside story on 21330 Home Alone, with fan designer Alex Storozhuk, Model Designers Antica Bracanov and Enrique Belmonte Beixer as well as Graphic Designer Kirsten Bay Nielsen.

Remember the classic set 6597 Century Skyway? It’s one of those wonderful Town airports from the 1980s and 1990s, and it’s used as a test case this month for how to restore a battered, unloved old set to its former glory. This guide will have you ordering damaged sets on eBay with confidence.

There’s also a great mod this month that demonstrates how 10293 Santa’s Visit can be turned into a regular house to fit into your layout once the Christmas season is over. If your minifigures need some shelter from the snow, Technique reveals how to create canopies and awnings.

As ever, that’s only a taste of what’s within Blocks magazine’s 116 pages, including a look at LEGO bricks helping reef restoration in Singapore, the top 10 Ideas sets so far, a Blockstalgic look at LEGO Dino, a visit to the Launderette of Dreams and much, much more.

Blocks is giving away a £1,000 LEGO gift card! To be entered into the prize draw and to get Blocks magazine delivered every month – ahead of the shops – visit www.blocksmag.com and check out the money-saving subscription deals available.

Everyone who subscribes to the print edition by December 23rd will be in with a chance of winning (existing subscribers will automatically be entered into the prize draw).