Gather the family for a rewarding build and play experience with the LEGO Disney 71044 Train and Station.

For any of you who have been to Disneyland or Walt Disney World, you will have first-hand experience on how the parks are genuinely one of the happiest places on earth. Children and adults alike can fully immerse themselves in Walt Disney’s creations, through rides, sights, sounds and good old fashioned, wholesome fun.

In August of 2016, LEGO released The Disney Castle [71040] – a large, loyal replica of Cinderella’s castle from Walt Disney World. Earlier this year, Steamboat Willie [21317] (Mickey Mouse’ first on-screen debut) was released as part of the LEGO Ideas range, so it was a lovely surprise to find out just a few months later that the Disney Train and Station [71044] set would be coming out to further expand the growing range.

Located near the entrance of Disneyland California, the Disney train is a great (free) way to tour the park and get off at a couple of stops along the way. The LEGO version is a painstakingly accurate representation of the real train, and similarly the station is about as close to the real thing as you can get! 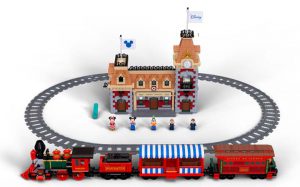 Beginning with the train, there are 4 parts; the main locomotive, the tender, a passenger car and a parlour car – all modelled from the original train. The locomotive is simply beautiful, with its large red front grill, buxom black chimney, all in contrast to the hunter green tube of the engine and finished with gold accents that add some real class to the train.

The tender houses the battery pack in a way that neatly conseals it, whilst allowing you to easily lift a flap and turn it on and off. The passenger car features the familiar blue candy stripe pattern on the roof, which mirrors on the side panels. There’s enough room inside to house 14 Minifigures (perhaps your doubles for the LEGO Disney Minifigure series?), as well as standing room for one Minifigure. Finally, the parlour car harks back to the olden days, with a luxurious interior, complete with 4 seats and a table with a teapot and teacup.

There are also 16 curved pieces of track and 4 straight pieces of track included, which form an oval for the train to travel on – surely this has to feature under your Christmas tree this year?!

As for the main station itself, it’s quite stunning… the brickwork is similar to the LEGO Ghostbusters Firehouse [75827], with the maroon red bricks offset with the grey. Juxtaposed with the caramel roof and sand trim, it all comes together and looks fantastic – it’s literally just like the real-life Disneyland station! There are 4 doors at the front of the building; 3 on the ground level and one on the first floor. There’s also a door on the left side of the ground level of the station. As well as doors, there are numerous windows – again, these look stunning with the curved caramel plates to form the slanted roofed shades.

Working our way up further, the black, wrought-iron effect railings have to be given a special mention as they look incredibly effective. Made from a simple black ‘jumper’ piece, with a black skeleton leg and handcuffs on top (just 3 pieces for each complete link), the railing slants ever so slightly to marry up with the next one in the link. 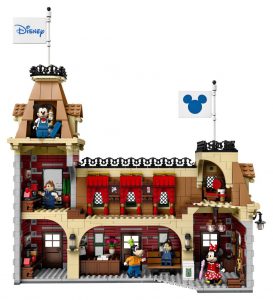 At the very top of the station are two big white flags; one carrying the Disney logo and the other displaying the mickey ears emblem. They add even more height to the building and finish it off perfectly.

The inside of the station has a lot going on, too; built over 2 main levels and a loft, there are some great little nods to the park. On the ground level there’s the main central entrance with the ticket booth and a bench. To the left is a shelf carrying a model train (with a picture of the train hanging above), and to the right of the entrance is a Disneyland Park trash can (we LOVE this), an umbrella stand, a luggage scale, wall-hanging pictures and a chandelier.

On the first floor is a hallway with curtained windows and a Mickey rug on the floor. To the left it steps up to another room (with another model train, picture and potted plant) which opens out to the balcony. To the right of the hallway is a small seating room with a table, complete with teacup.

Finally, in the loft is a lovely little addition – a miniature LEGO model of The Disney Castle set, complete with box! It’s incredibly cute and a brilliant nod to the first big LEGO Disney set.

As for the build, we clocked in at around 6 hours – there were 3 sticker sheets (yes 3!) which, if you’re like us, you spend way to much time applying, removing and reapplying to make sure they all align with the pieces you’re placing them on. I must admit that it would have been a welcomed relief to have a few more printed pieces in place of the stickers, but in the end it all adds up to a lovely looking aesthetic – the graphics on the stickers are very attractive indeed. The most enjoyable part of the build was the main brick wall and how beautiful it looks from both the outside and the inside – which has a completely different effect. Kudos again to the railings which were also fun to put together and place.

Thanks to LEGO’s ‘powered-up’ app, there is far more fun to be had with this set. Once you load up the app and wirelessly connect the power unit to your device (via bluetooth), you can actually control the train right from your phone or tablet! Forwards, backwards and stop commands are on the app, as well as the ability to play whistle, bell and music sound fx. The app plays a ‘chuff-chuff’ noise as the train moves and wheel screech noises as it brakes. There’s even an option to choose between 2 app layouts; the green (normal) layout, and a snow-covered Wintery theme.

If, like us, you’re a fan of Disney and want to take a little slice of the famous parks home with you, then this is a must-have set to add to your collection.

We’re really hoping this is the continuation of a line of Disney park related sets; wouldn’t it be amazing to have whole rides in LEGO form?, or, perhaps, a range of Main Street inspired modulars? Keep going LEGO! We love what you’re doing! 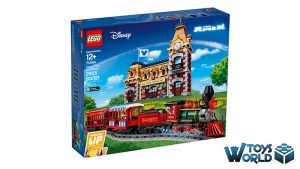 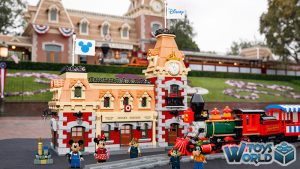 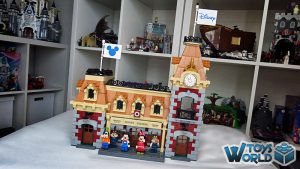 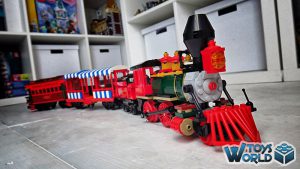 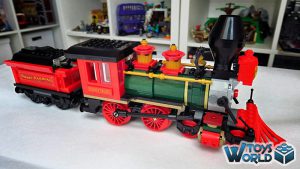 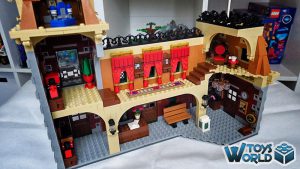 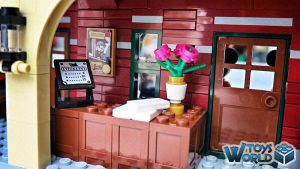 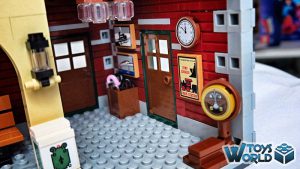