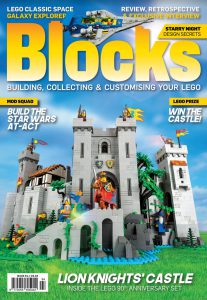 LEGO Castle and Classic Space are back in Blocks magazine Issue 94.

It’s time for the most anticipated LEGO sets of this 90th anniversary year – and Blocks Magazine has the essential companion to 10305 Lion Knights’ Castle and 10497 Galaxy Explorer.

Issue 94 is available worldwide as a single issue or as part of a subscription at blocksmag.com and will be in UK stores from August 4th. Everyone who subscribes by August 31st will be in with a chance of winning 10305 Lion Knights’ Castle!

To set the scene for the incredible 4,514-piece castle of fans’ dreams, Model Designer Milan Madge and Design Master Mike Psiaki give an in-depth interview, revealing their process for coming up with this enormous homage to LEGO Castle. They talk sketch models, Black Falcon Knights, hitting the right complexity level – and more.

Then to get the mood right for focusing on the reimagined Galaxy Explorer, Blocks goes down memory lane with the original Classic Space sets, looking back at why these models became ‘classic’ and the particular take on science fiction that they offer. It’s followed by more from Mike Psiaki, who shares his experience of bringing the theme back.

If that’s not enough Space nostalgia, Blockstalgia spotlights Space Police II and includes instructions for building a modular cellblock. From the Vault reveals why monorails didn’t become a LEGO mainstay.

Turning from science fiction to space opera, Mod Squad shows how to transform the UCS AT-AT into the AT-ACT from Rogue One. Turn that model from a display piece into a build project by following the guide to reconstruct the head and add the cargo doors.

Blocks is giving away 10305 Lion Knights’ Castle! To be entered into the prize draw and to get Blocks Magazine delivered every month – ahead of the shops – visit www.blocksmag.com and check out the money-saving subscription deals available.

Everyone who subscribes to the print edition by August 31st will be in with a chance of winning (existing subscribers will automatically be entered into the prize draw).