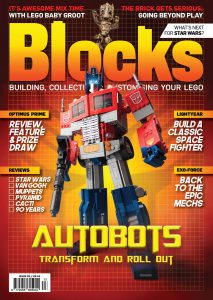 The surprise collaboration of the year takes the cover for Blocks Magazine Issue 93. As well as reviewing LEGO Transformers 10302 Optimus Prime, Blocks hears from the designers who had the challenge of creating a set that can transform without being dismantled.

Issue 93 is available worldwide as a single issue or as part of a subscription at blocksmag.com and will be in UK stores from July 7th. Everyone who subscribes by August 3 will be in with a chance of winning 10302 Optimus Prime!

LEGO Senior Designer Joseph Patrick Kyde used to design Transformers toys at Hasbro, which made him the perfect person to create the first ever official LEGO version of the Autobot. He reveals how he stepped up the challenge while channelling his inner child.

On the topic of mechs, Blockstalgia revisits Exo-Force, looking back at the action-packed sci-fi theme from the noughties. The retrospective looks at sets from the anime-inspired story-driven range and updates one of the models with modern elements.

Going much further back in time, Blocks continues to mark the LEGO Group’s 90th anniversary by telling the full story of how Ole Kirk Kristiansen started making toys – there are twists and turns that you are unlikely to have heard before.

Classic Space fans have already noticed that the new Lightyear spaceship has a certain cockpit piece that fits the beloved theme’s aesthetic perfectly; Mod Squad shows how to convert Buzz’s vessel into a retro fighter.

Find out how Serious Play methodology uses LEGO bricks for something other than pure fun, as Blocks speaks to trainers who deliver creative workshops to organisations. This issue also includes a report from Star Wars Celebration Anaheim, where fans of the franchise enjoyed plenty of LEGO activity.

Blocks is giving away Transformers 10302 Optimus Prime! To be entered into the prize draw and to get Blocks magazine delivered every month – ahead of the shops – visit www.blocksmag.com and check out the money-saving subscription deals available.

Everyone who subscribes to the print edition by August 3rd will be in with a chance of winning (existing subscribers will automatically be entered into the prize draw).