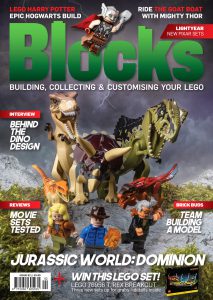 Issue 92 of Blocks, the LEGO magazine for fans, is delivering an edition 65 million years in the making. The new Jurassic World: Dominion sets are reviewed and there’s a behind-the-scenes look at how they were designed.

Issue 92 is available worldwide as a single issue or as part of a subscription at blocksmag.com and will be in UK stores from June 2nd. Everyone who subscribes by July 7th will be in with a chance of winning one of three 76956 T. rex Breakout sets!

It’s time to get the gang back together as Alan Grant, Ellie Sattler and Ian Malcom reunite in Jurassic World: Dominion. They’re not the stars of the feature film though – that distinction goes to the prehistoric beasts who will be running amok in the real world. This month’s cover feature has the designers of the new LEGO dinosaurs explaining their process, as well as an in-depth look at the nostalgic 76956 T. rex Breakout set.

Things get decidedly epic when it comes to the incredible Hogwarts Castle build, presented by Daniel Konstanski. He explains what inspired the MOC, his build process and what the reaction was like when he showed it to the public. It’s a Harry Potter model at a scale that’s sure to impress and inspire you.

Unusually, the Blocks team get together to build something – namely 10270 Bookshop. Three LEGO enthusiasts see how they get on using the new Build Together digital instructions and give an assessment of how it went.

LEGO Pirates fans might prefer to forget the 1996 and 1997 waves of sets, which brought the initial run of the theme to an abrupt and disappointing end. That doesn’t mean Blocks has forgotten though and this month’s magazine looks back at those frustrating two years before showing how to build a lookout worthy of the Imperial Armada.

There is plenty more besides in this month’s 116-page magazine, including the top 10 magical minifigures, tips for building historical weapons and a show report from Bricktastic.

Blocks is giving away three 76956 T. rex Breakout sets! To be entered into the prize draw and to get Blocks magazine delivered every month – ahead of the shops – visit www.blocksmag.com and check out the money-saving subscription deals available.

Everyone who subscribes to the print edition by July 7th will be in with a chance of winning (existing subscribers will automatically be entered into the prize draw).