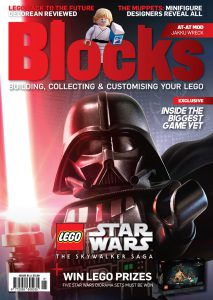 The Force is with Blocks Magazine Issue 91, as this month’s issue goes inside the development of LEGO Star Wars: The Skywalker Saga, the best-selling video game that has taken the world by storm. There’s also an introduction to the new Diorama Collection that captures classic moments as display models.

Issue 91 is available worldwide as a single issue or as part of a subscription at blocksmag.com and will be in UK stores from May 5. Everyone who subscribes by June 1st will be in with a chance of winning one of three 75330 Dagobah Jedi Training Diorama sets!

That’s not all though! To celebrate Star Wars day, there’s a special May the Fourth promotion – anyone who takes out a print subscription (or extends their print subscription) between now and May 4, 2022 will get THREE FREE Blocks magazine back issues featuring Star Wars covers. No discount code required! More information can be found at blocksmag.com.

Three of the lead creatives at TT Games discuss their work on LEGO Star Wars: The Skywalker Saga, explaining how they approached a game that covers all nine Star Wars movies. You’ll learn about what goes into designing game levels, choosing characters and incorporating more bricks than ever before.

Blocks has the most sensational, inspirational, celebrational, collectible, muppetational interview with the design team who brought The Muppets to the brick. It’s the best insight ever into how a series of LEGO Collectible Minifigures comes to be, illustrated with development art.

LEGO Model Designer Sven Franic goes Back to the Future for a spin in his new DeLorean, sharing the secrets behind constructing this incredible new movie-inspired model. Speaking of going back in time, Blockstalgia takes a rose-tinted look at the excellent 1990s Town subtheme, Launch Command.

That’s just a taster of what’s in this month’s 116-page magazine, which also include tips on bringing different build techniques together, a Dr Strange in the Multiverse of Madness set review, Indiana Jones vignettes and much more besides.

Blocks is giving away three 75330 Dagobah Jedi Training Diorama sets! To be entered into the prize draw and to get Blocks magazine delivered every month – ahead of the shops – visit www.blocksmag.com and check out the money-saving subscription deals available.

Everyone who subscribes to the print edition by June 1 will be in with a chance of winning (existing subscribers will automatically be entered into the prize draw).

Everyone who subscribes between 00.01 BST April 29th and 23.59 BST May 4th will receive three Blocks magazine back issues with Star Wars covers. These will be chosen at random. Only available while stocks last.