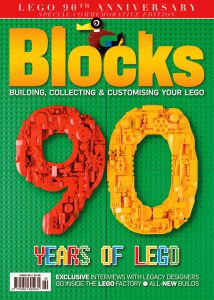 It’s time for the issue of Blocks Magazine that no LEGO fan can afford to miss – Blocks Issue 90 is kicking off the LEGO Group’s 90th anniversary party! This 116-page special edition is packed with exclusive features, including interviews with legacy designers, 90 years in artefacts and a tour of the LEGO factory.

Issue 90 is available worldwide as a single issue or as part of a subscription at blocksmag.com and will be in UK stores from April 7th. Everyone who subscribes by May 4th will be in with a chance of winning one of two 10298 Vespa 125 sets!

What’s wrong with the classic horse? How can designing monorail layouts get boring? Surely the LEGO owner didn’t help design Captain Redbeard?! The only way to get stories like this is from the people who were there in the 1980s and 1990s, when design choices were made that still define what LEGO sets are today.

The designers interviewed in this special issue have 164 years of LEGO experience between them. Niels Milan Pedersen is responsible for LEGO Pirates and elements like the Space gun, Steen Sig Andersen has been involved in dozens of incredible projects, while Bjarne P Tveskov worked on Space themes like Futuron, Blacktron and Space Police. Torben Plagborg reveals how Trains could have disappeared altogether until he introduced 9V and Henk van der Does pulls back the curtain to explain what role a model coach plays.

While the 1980s is a key period for the LEGO System fans know and love today, the company has a rich history going back to when Ole Kirk Kristiansen started making wooden toys. Through special access to the LEGO Group’s archives, Blocks has pulled out 15 items and photographs that tell interesting stories from the past nine decades.

There is also an all-new build depicting Ole Kirk’s woodworking shop, the place where the first plastic moulding machine was introduced. It’s an authentic model, based on actual floorplans of the building. Three mini builds recreate classic wooden toys as micro models – with full instructions.

Bringing things back to the present, you can get a rare glimpse inside the LEGO factory and find out how tiny plastic pellets become the all-important elements that are the basis of this entire hobby.

Packing out the rest of the 116 pages are tributes to LEGO legends Jens Nygaard Knudsen and Dagny Holm Jensen, reviews of 10298 Vespa 125, Speed Champions and Super Mario – and much, much more.

Blocks is giving away two LEGO 10298 Vespa 125 sets! To be entered into the prize draw and to get Blocks magazine delivered every month – ahead of the shops – visit www.blocksmag.com and check out the money-saving subscription deals available.

Everyone who subscribes to the print edition by May 4th will be in with a chance of winning (existing subscribers will automatically be entered into the prize draw).