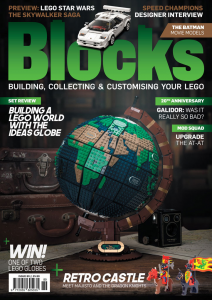 The cover of Blocks magazine reveals this month’s spotlight review – the LEGO Ideas Globe. That’s just the beginning though, with Issue 89 featuring a reappraisal of Galidor 20 years on, an interview looking at the new Speed Champion releases, The Batman movie set reviews, a preview of LEGO Star Wars: The Skywalker Saga and much more.

Issue 89 is available worldwide as a single issue or as part of a subscription at blocksmag.com and will be in UK stores from March 3. Everyone who subscribes by April 6 will be in with a chance of winning one of two 21332 The Globe sets!

LEGO Design Manager Chris Stamp is one of the LEGO Group’s most insightful design professionals, always ready to give a genuine peek under the hood of Speed Champions. This month he runs through all of the new sets, explaining what went into the design of each car.

Not every theme is as long-running as Speed Champions though – in fact some don’t work out at all. It’s 20 years since Galidor was a huge flop for the LEGO Group, so Blocks is revisiting the action figure range to see if it deserves its awful reputation. Daniel Konstanski inspects the products, then LEGO Senior Designer Nicolaas Vás tells the story of his creative journey with Nick Bluetooth.

That’s not the only time machine journey this month, with a retrospective feature on the original LEGO Star Wars video games recalling why these became instant classics. With TT Games heading back to a galaxy far, far away, there’s also a preview of LEGO Star Wars: The Skywalker Saga to get you ready for April 5.

As for Blockstalgia, it’s time for Dragon Knights to take the spotlight. Castle introduced the wizard and the dragon in the 1990s, which have both since become LEGO icons. As well as a look at some of those retro models, there are instructions for a modern take on Majisto’s Magic Shop.

Packing out the rest of the 116 pages are The Batman movie set reviews, a minifigure friendly mod for the UCS AT-AT, a guide to building carts and carriages, a run-down of Collectible Minifigures Series 22, top ten globe-trotting sets and much, much more.

Blocks is giving away two LEGO Ideas 21332 The Globe sets! To be entered into the prize draw and to get Blocks magazine delivered every month – ahead of the shops – visit www.blocksmag.com and check out the money-saving subscription deals available.

Everyone who subscribes to the print edition by April 6 will be in with a chance of winning (existing subscribers will automatically be entered into the prize draw).