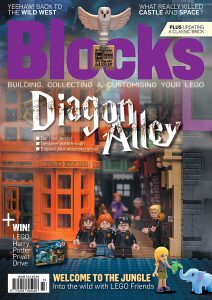 The latest issue of Blocks magazine is available now at www.blocksmag.com and in those UK shops that are open. With lockdown in the UK and other restrictions around the world limiting where fans can buy the magazine, there’s no better time to set up a subscription, with a direct debit payment option now available worldwide.

Once the LEGO Design Wizard Marcos Bessa has provided a tour of 75978 Diagon Alley, the set gets a Blocks review along with the other new LEGO Harry Potter releases. That’s not all though, as Blocks demonstrates how to build Gringotts Bank at a scale to match the new set so that the street can be extended.

A look back at how advertising has evolved – and how the LEGO Group has kept up with it – reveals why classic themes like Space and Castle do not exist today. It’s not just a fascinating read, it’s illustrated by classic LEGO print adverts from decades gone by, reproduced as full pages as they would have been back in the day.

LEGO Friends returned to the jungle this year, introducing animal pieces including updated elephants and all-new sloths. LEGO Creative Director Fenella Blaize Charity reveals how the team came up with this latest animal adventure subtheme and developed creatures that would add to the LEGO menagerie.

It’s not just the set designers who play a key role in the world of LEGO product development though, as the all-important Element Designers also make a huge impact on the building experience. In an exclusive interview, Blocks finds out how a classic shooter element is redesigned to make it better fit within the system.

This issue also includes top tips for building elegant household items using LEGO bricks, including coasters, business card holders and tissue boxes – these will serve as great entry point projects for those spending more time at home over the next few weeks.

Blocks Issue 73 contains plenty more fantastic LEGO content, including a look back at LEGO Western in Blockstalgia, an upscaled Joker minifigure model in Month in MOCs and Avatar: The Last Airbender in Ideas Showcase.

Be in with a chance of winning one of ten LEGO Harry Potter 75968 4 Privet Drive sets! To be entered into the latest prize draw and to get Blocks magazine delivered every month – ahead of the shops – visit www.blocksmag.com and check out the money-saving subscription deals available.

Everyone who subscribes to the print edition by December 1 will be in with a chance of winning (existing subscribers will automatically be entered into the prize draw).