The Stormtrooper’s sinister look is reproduced in detail with LEGO bricks plus graphics stickers, and the helmet comes with a base and nameplate to show it off at home or as an eye-catching office desk ornament.

As Season 2 of The Mandalorian hits Netflix today, we fancied ourselves a dip into the 2020 LEGO Star Wars offerings and came up trumps with the recently released Stormtrooper Helmet [75276] set. Here’s our take!

Aimed at the 18+ demographic, this set kicks off LEGO’s new Star Wars Helmet Collection; a series of builds that you can display with pride, whilst having a little fun along the way in the actual build.

Comprised of 647 pieces, it’s not a particularly difficult set to put together, and, if anything, it was actually quite relaxing. There are some fiddly 1×1 pieces to place, as well a small number of stickers, but the finished model looks fantastic! From the familiar accents of the dome shape, to the detailing of the vents, grills and breathing apparatus, not only is this a loyal replica, but it’s a welcomed addition to your shelf.

We clocked the build time at approximately 1 hour and 20 minutes (15 of that was easily down to the fact we HAVE to get said stickers placed perfectly and equidistantly on the corresponding bricks – we’re not alone here, right?). We particularly enjoyed the build-up of the sides, which, once completed, neatly push into place, and instantly bring the Stormtrooper to life. Likewise, the breathing vents at the front were satisfying to click into place and slide up into position.

There’s also a handy stand which the helmet sits on. Comprised of all black pieces, you build the stand in bag 2, and it even comes with a ‘LEGO Star Wars – Stormtrooper’ nameplate, which clips onto the front. It really helps it look and feel classy, as well as completing the overall aesthetic.

Hate to admit it, but the helmets didn’t initially jump out to us when we first saw the press release from LEGO, but having them in front of you, as well as noticing the many accurate pieces of detailing, makes us want to complete the collection. 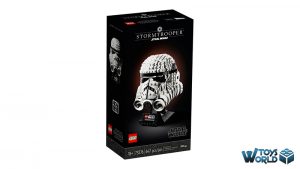 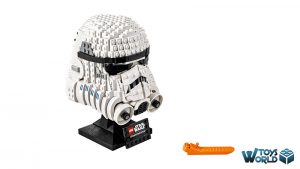 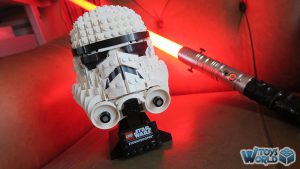 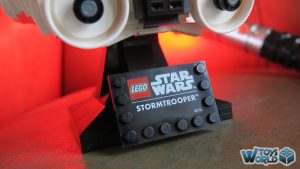 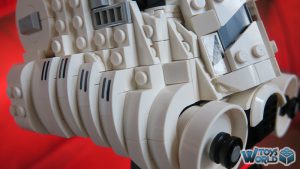 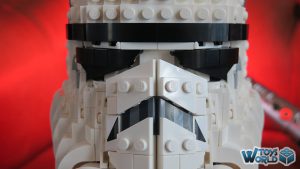