The kingdom has been ravaged by an origami menace! Join Mario and his new partner, Olivia, as they battle evil Folded Soldiers, repair the damaged landscape, and try to free Princess Peach’s castle from the clutches of King Olly in this comedy-filled adventure, only on the Nintendo Switch™ system.

Line up scattered enemies and plan your attack to maximize damage with the new, ring-based battle system that requires both puzzle-solving skills and a quick wit.

Mario and Luigi receive an invitation from Princess Peach to attend an origami festival and excitedly hurry to Toad Town…but something’s amiss. After investigating the eerily empty town, the duo finds a fearsome (and folded) Princess Peach—she’s been turned into origami by King Olly, ruler of the Origami Kingdom! With five giant streamers under his control, King Olly binds Princess Peach’s Castle and transports it to a distant mountain as part of his plan to re-fold the world.

On his journey to liberate Peach’s Castle and repair the ravaged paper landscape, Mario meets Olivia, King Olly’s sister, and the two join forces to put a stop to Olly’s origami onslaught. Even Bowser falls victim to Olly’s plot when his minions are turned into origami Folded Soldiers and betray their Koopa king, forcing him to ally with Mario and Olivia!

Battle the Folded Soldiers in ring-based battles that challenge you to strategically line up enemies to maximize damage! Out of battle, Mario can use the arm-extending 1,000-Fold Arms ability in specific spots to interact with the landscape to pull, peel, hit, and more! Join Mario, Olivia, and their companions on a journey of laughter and emotion, thrills, and a whole lot of folding. 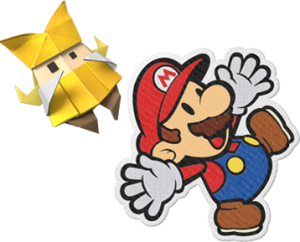 In a nutshell, our hero plumbers receive an invite from Princess Peach to attend the origami festival in Toad Town. On arrival, the brothers discover there’s no-one there except a rather creepy origami Princess Peach, who has been transformed by King Olly (the titular Origami King). His plan is to re-fold the world and with five giant streamers under his control, it’s up to Mario to save the day.

The visuals are everything you could want from a Mario game; bright, colourful and high contrast – a true tip of the hat to the art direction department. The 2D Mario juxtaposed in the 3D world with other 3D characters, somehow works really well. Just like in Yoshi’s Crafted World, you can interact with much of the scenery around you, and with some of Mario’s added skills, you can reach up and tear town walls or panels, which, in turn, feels rather satisfying in the process.

The RPG element comes in the form of a rather strange combat system, which feels more at home on Bullseye than it does in the Mushroom Kingdom. That being said, it does mix up the gameplay, and requires you to think more tactically as the game progresses – even if it does feel like you’re playing a completely different game, at times. The boss battles mix things up further owing to their own mechanics which mean they have to be dealt with in a specific way.

One other little gripe, which we want to get out the way, is how wordy gameplay is – especially at the beginning. Whilst it’s handy having tips to enable you to grasp the gameplay, when it’s coupled with the many character interactions, you quickly find yourself longing to scroll through the words and just play. This does improve as you make your way through the game, however. 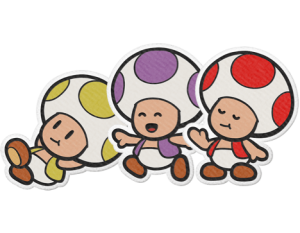 It was fun to actually have some of the Super Mario baddies from games gone by as your actual ally in this game. From helping Bowser to aiding Koopa Troopers find salvation, Mario is dipping his 2D toes into uncharted waters, here. Again, we see an example of Paper Mario flipping the script and going down a different path – something that it hasn’t shied away from in the past.

At its heart, Paper Mario: The Origami King is a charming addition to the Mario franchise – one that will entertain and challenge you, even if the on-screen prompts do get a little sticky in places. There is much to be celebrated here, and we hope whatever iteration Paper Mario takes the form of next, it will take the spirit of this game with it. 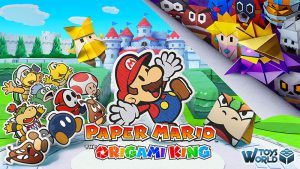 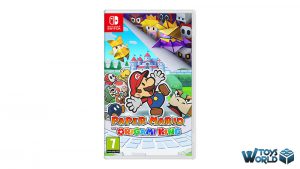 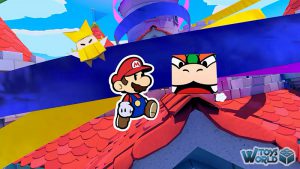 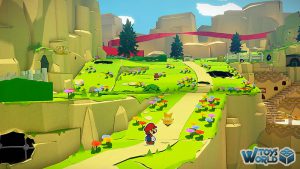 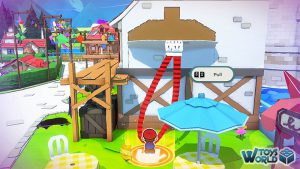 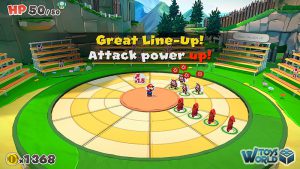