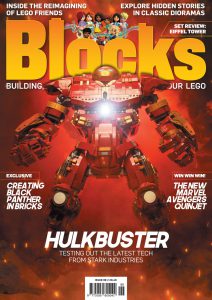 It’s time for a look at the enormous Marvel Hulkbuster in Blocks magazine Issue 99, as well as a deep dive into the Black Panther bust with LEGO Senior Designer Mark Stafford. For those who love LEGO catalogue spreads from the 1990s, there’s a special feature focused on those epic scenes.

Issue 99 is available worldwide as a single issue or as part of a subscription at blocksmag.com and will be in UK stores from January 5th. Everyone who subscribes by February 1st will be in with a chance of winning 76248 The Avengers Quinjet!

Marvel 76210 Hulkbuster takes centre stage on the cover of Blocks magazine Issue 99, with a review of the set inside. 76216 Iron Man Armoury also goes under the spotlight, while Mark Stafford reveals why 76215 Black Panther was one of his trickiest projects yet in an exclusive interview.

Last year, Blocks magazine provided the most comprehensive look yet at how LEGO Friends came to be; with Friends being rebooted for 2023, you can read the story of how the team went back to basics to reimagine the evergreen theme. Head of Design Matthew Ashton, Design Director Fenella Blaize-Charity, Senior Designer Ellen Bowley and Marketing Lead Costas Syrmos reveal all – illustrated with fantastic concept art.

It’s not all about the new in Blocks though – revisit classic LEGO catalogue spreads featuring Castle, Pirates and Town in more detail than ever before. See high resolution images reproduced as full-page spreads that allow the hidden details within the scenes to be fully exposed… you’ll get to see some of the things the designers tucked away in the background that were too small to get a good look at before.

The LEGO train community recently celebrated the creativity of builders around the world with the Brick Train Awards, so to share in the revelry Blocks is picking out some of the winning models and speaking to the talented builders with an eye for detail.

That’s just a taste of what’s in Blocks magazine Issue 99’s 116 pages; there’s a look at the new paper bags, a review of the mammoth 10307 Eiffel Tower, tips for building catapults, a look back at Nautica, top 10 Marvel characters, plus much, much more.

For a bonus dose of Blocks magazine, 100 Incredible LEGO Builds is a special one-off issue that celebrates the amazing creativity of LEGO builders from around the world. It’s guest edited by Head of Design Matthew Ashton, with commentary provided throughout by the LEGO design team. No LEGO fan should miss it!

Blocks is giving away LEGO 76248 The Avengers Quinjet! To be entered into the prize draw and to get Blocks magazine delivered every month – ahead of the shops – visit www.blocksmag.com and check out the money-saving subscription deals available.

Everyone who subscribes to the print edition by February 1st will be in with a chance of winning (existing subscribers will automatically be entered into the prize draw).