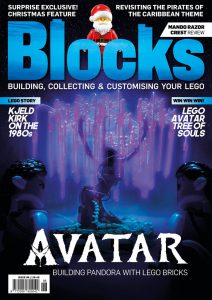 What better way could there be to wrap up the LEGO Group’s 90th anniversary than by hearing from Kjeld Kirk Kristiansen? Learn about his early days taking over from his father as CEO in Blocks magazine Issue 98, which also includes a detailed look at LEGO Avatar sets and a surprise Christmas feature with some exclusive interviews that will get you in the festive mood.

Issue 98 is available worldwide as a single issue or as part of a subscription at blocksmag.com and will be in UK stores from December 1. Everyone who subscribes by January 4th will be in with a chance of winning Avatar 75574 Toruk Makto & Tree of Souls!

In an exclusive excerpt from The LEGO Story, LEGO Group owner Kjeld Kirk Kristiansen discusses the transition that saw him become CEO, as he reinvigorated product development by coming up with themes within the LEGO System and introducing the beloved minifigures. The book’s author also shares his experiences of getting deep into the Kirk Kristiansen family history.

Things keep moving forward though and Blocks is getting ready for Avatar: The Way of Water by previewing the new movie sets, reviewing the first wave of models and getting insight from the LEGO designers who figured out how to bring James Cameron’s enormous world of Pandora to the brick.

There’s also a surprise feature in this issue that will have you ready for Christmas – it includes interviews with two accomplished LEGO professionals and someone else who is becoming part of this blocky world for the first time.

Over in Billund, the creatives at LEGO House are always dreaming up new experiences for guests. To get an insight into this development, Blocks magazine finds out how Mood Mixer became the latest attraction at the Home of the Brick in an exclusive interview, illustrated with never-before-seen development art.

That’s just a taste of what’s in Blocks magazine Issue 98’s 116 pages; there’s a debate about Ideas set sizes, reviews of Star Wars 75292 The Razor Crest and Super Mario 71411 The Mighty Bowser, the top 10 landmark models, a nostalgic look at LEGO Pirates of the Caribbean, plus much, much more.

For a bonus dose of Blocks magazine, 100 Incredible LEGO Builds is a special one-off issue that celebrates the amazing creativity of LEGO builders from around the world. It’s guest edited by Head of Design Matthew Ashton, with commentary provided throughout by the LEGO design team. No LEGO fan should miss it!

Blocks is giving away LEGO Avatar 75574 Toruk Makto & Tree of Souls! To be entered into the prize draw and to get Blocks magazine delivered every month – ahead of the shops – visit www.blocksmag.com and check out the money-saving subscription deals available.

Everyone who subscribes to the print edition by January 4th will be in with a chance of winning (existing subscribers will automatically be entered into the prize draw).