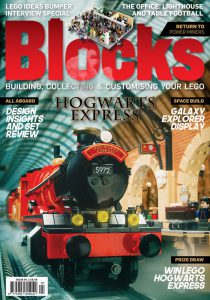 The Hogwarts Express is back in the LEGO brick, at a scale and with a level of detail never offered before – so Blocks magazine Issue 97 is going deep into the making of the model with Design Master Marcos Bessa. There are also behind-the-scenes stories from the Ideas team, including their trickiest challenge yet; making 21337 Table Football happen.

Issue 97 is available worldwide as a single issue or as part of a subscription at blocksmag.com and will be in UK stores from November 3. Everyone who subscribes by November 30 will be in with a chance of winning 76405 Hogwarts Express – Collectors’ Edition! Subscription prices are frozen until November 2, so be sure to order before then to secure the best price.

As well as a look at how Harry Potter 76405 Hogwarts Express was developed, Blocks reviews the set to see if it really is the first-class experience that the piece count suggests. There’s also a look at the Ministry of Magic and this year’s Wizarding World advent calendar.

On the topic of Christmas, there are some lovely seasonal features, including a guide to building a bespoke board game to play with your family (rigging the rules in your favour is optional). There’s also the top 10 Christmas LEGO sets, the best LEGO books for your wishlist and a look at 10308 Holiday Main Street.

Mod Squad tackles 10497 Galaxy Explorer, showing how to build a modern version of the vintage lunar landscape baseplate. It’s the perfect way to display the upgraded Classic Space set, giving it a vibe that will transport you back to childhood.

As for the LEGO Ideas team, they reveal to Blocks how they made one of the trickiest sets ever – 21337 Table Football – happen, and tell the less dramatic, but still interesting, stories behind adapting fan designs to become 21336 The Office and 21335 Motorized Lighthouse.

There’s plenty more to be found within the 116-page magazine, including a look at the modern classic Power Miners sets, an impressive Fabuland layout, visiting the LEGO headquarters in Billund and much, much more.

Blocks is giving away 76405 Hogwarts Express – Collectors’ Edition! To be entered into the prize draw and to get Blocks magazine delivered every month – ahead of the shops – visit www.blocksmag.com and check out the money-saving subscription deals available.

Everyone who subscribes to the print edition by November 30 will be in with a chance of winning (existing subscribers will automatically be entered into the prize draw).