LEGO Speed Champions is driving off the racetrack and into the fictional world of James Bond, so Blocks magazine is giving minifigure 007 the cover for Issue 96. Along with the review of the new Aston Martin DB5, you’ll find analysis of the balance between licensed and homegrown LEGO themes, a guide to the mystery of Minitalia and an exclusive interview discussing the first ever LEGO CD-ROM. 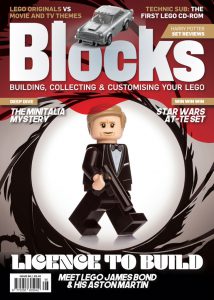 Issue 96 is available worldwide as a single issue or as part of a subscription at blocksmag.com and will be in UK stores from October 6. Everyone who subscribes by November 2nd will be in with a chance of winning 75337 AT-TE Walker!

Blocks magazine is delving into the fascinating battle between homegrown and licensed LEGO themes in Issue 96. Two decades ago, the company launched a few licensed themes but there was always a focus on original LEGO themes… times have certainly changed! Find out how this has evolved over the years as Blocks crunches the numbers and provides commentary on why this shift has happened.

A great example of a licensed set is the one with a licence to kill. 76911 007 Aston Martin DB5 presents James Bond as a minifigure for the first time ever and builds the iconic DB5 – Blocks assesses the set to see if it’s worthy of 00 status, as well as taking a look at sets from Star Wars, Harry Potter, Super Mario, Collectible Minifigures and more.

Before licensed sets existed, before minifigures were introduced, the LEGO Group tried some strange experiments – and Minitalia is one of the most confounding. Find out what fans have unearthed about this Italy-exclusive run of products made from lower quality plastic and why it’s hard to get the full story behind it.

Another tale from LEGO history is shared by Bjarne P Tveskov, who has worked with the company for decades. He recalls what it was like to work with Technic and oversee the first ever LEGO CD-ROM, which featured all-new digital building instructions. It’s a fascinating insight into the very early days of what is now known as ‘fluid play’.

There’s plenty more to be found within the 116-page magazine, including a nostalgic look at Aquasharks, an interview with a LEGO stop motion master, tips for building wells, a look inside the world’s largest LEGO Store, the top 10 lighthouse sets and much, much more.

Blocks is giving away 75337 AT-TE Walker! To be entered into the prize draw and to get Blocks magazine delivered every month – ahead of the shops – visit www.blocksmag.com and check out the money-saving subscription deals available.

Everyone who subscribes to the print edition by November 2nd will be in with a chance of winning (existing subscribers will automatically be entered into the prize draw).