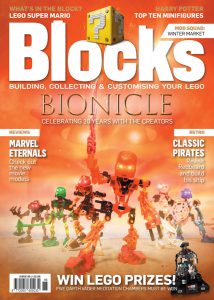 In this milestone year for LEGO BIONICLE, Blocks magazine celebrates the story-driven theme that reinvigorated the LEGO development process and helped save the company.

Issue 85 is available worldwide as a single issue or as part of a subscription at www.blocksmag.com and will be in UK stores from November 4. Subscribe today to be in with a chance of winning £1,000 to spend at the LEGO Store and one of five 75296 Darth Vader Meditation Chamber sets!

While BIONICLE delivered something different to traditional LEGO sets with buildable action figures, it also changed the way the LEGO Group develops in house story driven themes. In an exclusive feature, the creators behind BIONICLE reveal how they came up with the concept and turned it into a multi-year, epic fantasy adventure that took the world by storm.

This month’s striking cover art is also available as a double-sided A2 poster with no cover lines. Subscribers get a £6 discount on the high quality poster.

That’s not the only classic theme Blocks is revisiting, with the original 1989 wave of LEGO Pirates sailing into Issue 85. As well as look back at some of the theme’s best – and worst – sets, Blockstalgia includes instructions for building a mini Black Seas Barracuda.

With new Marvel movie Eternals arriving in cinemas, there are reviews of the LEGO sets based on the film along with 71395 Super Mario 64 Question Mark Block, new City wildlife sets and 10295 Santa’s Visit.

The festivity continues in Mod Squad, which offers a guide to turning 31120 Medieval Castle into a jolly Christmas market. Rather than leave the castle on the shelf this holiday, these tips show how to turn it into a European style snow-covered market, the perfect spot for minifigures to enjoy a warming drink.

If you’re thinking of attending a LEGO convention or want some extra tips for the next one you visit, then there’s also a guide to attending brick events. Find out what’s in store and get some advice on making sure your MOC is admired.

There’s plenty more besides in Blocks magazine’s 116 pages, including an interview with the latest LEGO Masters champions, the top 10 Harry Potter minifigures, LEGO House Masterpiece Gallery models, how to light paint around your minifigures, a guide to building clocks and much, much more.

Blocks is giving away a £1,000 LEGO gift card and five 75296 Darth Vader Meditation Chamber sets! To be entered into the prize draws and to get Blocks magazine delivered every month – ahead of the shops – visit www.blocksmag.com and check out the money-saving subscription deals available.

Everyone who subscribes to the print edition by December 1 will be in with a chance of winning (existing subscribers will automatically be entered into the prize draw).