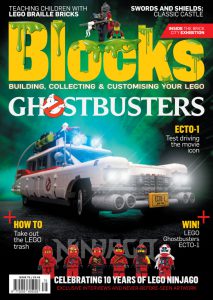 Blocks magazine is kicking off 2021 with a packed Issue 75, including a celebration of LEGO NINJAGO, an exclusive look at LEGO Braille Bricks and a review of the new Ghostbusters ECTO-1. It’s available as a single issue or as part of a subscription at www.blocksmag.com and will be in UK shops from Thursday.

There have been many LEGO success stories, but one of the most remarkable is LEGO NINJAGO – the action adventure theme launched a decade ago, became a smash hit and has been running ever since. Blocks magazine has exclusive interviews with the creatives who bring NINJAGO to toy store shelves and television screens, illustrated with never-before-seen conceptual artwork and sketch models.

When the LEGO Group isn’t coming up with new product ranges to capture the imagination of children, the company’s not-for-profit arm is partnering with charities around the world to help enrich the lives of children. A look at Braille Bricks reveals how an adapted version of the classic 2×4 brick is teaching children with visual impairment an essential life skill.

As for the Reviews section, it kicks off with a look at 10274 Ghostbusters ECTO-1, finding out if this LEGO depiction of the silver screen’s most beloved ramshackle car lives up to its reputation and delivers all of the spook-seeking action cinephiles demand. That’s not all though, with the new Star Wars: The Mandalorian 75299 Trouble on Tatooine getting expert consideration along with DC, City and NINJAGO sets.

Month in LEGO looks at some of the new releases that are available to buy now, highlighting the most interesting sets for collectors to check out. Technique provides tips on taking out the LEGO trash, showing how to go beyond the rubbish bin element and construct authentic looking dumpsters for LEGO layouts. Month in MOCs travels from the Old West to Geonosis – via Michigan – to share some incredible original builds.

In addition to an interview with Warren Elsmore about his Brick City exhibition, regular sections include Blockstalgia, Piece Perception, Top Ten, This LEGO Life, Ideas Showcase and LUG Spotlight.

Be in with a chance of winning one of two 10274 Ghostbusters ECTO-1 sets! To be entered into the latest prize draw and to get Blocks magazine delivered every month – ahead of the shops – visit www.blocksmag.com and check out the money-saving subscription deals available.

Everyone who subscribes to the print edition by February 3rd will be in with a chance of winning (existing subscribers will automatically be entered into the prize draw).