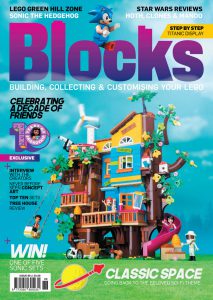 Issue 88 is available worldwide as a single issue or as part of a subscription at blocksmag.com and will be in UK stores from February 3rd. Everyone who subscribes by March 2nd will be in with a chance of winning one of five 21332 Sonic the Hedgehog sets!

Whether you’re a diehard LEGO Friends fan or someone who picks up the occasional set, the 10th anniversary interview feature provides unparalleled insight into the design and development process. Senior Design Director Rosario Costa and Creative Director Fenella Blaize Charity share stories that have never been told before – you’ll learn what the original codename was, why the minifigure didn’t make the cut and how the theme caught the eye of the entire design organisation.

There’s more than Friends of course, with the designers of 10297 Boutique Hotel providing a tour of the luxurious accommodation and showing early concepts that are quite different to the finished modular. Blocks also gets the inside scoop on the delightfully wacky 80032 Chang’e Moon Cake Factory set from Monkie Kid – bunny mech questions are answered.

If you have 10294 Titanic on display, you know it looks great – yet improbably, it can look even better. Mod Squad shows how to build a base worthy of the enormous vessel and also offers some smaller builds for those who need an entry point. A set like Titanic deserves extra special presentation.

Classic Space takes the spotlight in Blockstalgia for a blue voyage that revisits some of the most beloved LEGO sets ever released. There are also instructions showing how to build a modern version of 6890 Cosmic Cruiser—and naturally, it’s swooshable.

Packing out the rest of the 116 pages are a guide to building minifigure scale aquariums, a debate on whether there’s too many large LEGO sets getting released, a look back at Scala dolls, top 10 Friends sets and much, much more.

Blocks is giving away five LEGO Ideas 21331 Sonic the Hedgehog sets! To be entered into the prize draw and to get Blocks magazine delivered every month – ahead of the shops – visit www.blocksmag.com and check out the money-saving subscription deals available.

Everyone who subscribes to the print edition by March 2nd will be in with a chance of winning (existing subscribers will automatically be entered into the prize draw).