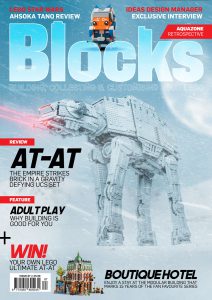 It’s time to get to grips with the LEGO Star Wars Ultimate Collector Series AT-AT and the new Boutique Hotel set in Blocks Magazine Issue 87, which also includes an extended interview with the LEGO Ideas Design Manager.

Issue 87 is available worldwide as a single issue or as part of a subscription and will be in UK stores from January 6. Everyone who subscribes by February 2nd will be in with a chance of winning 75313 AT-AT!

The LEGO Star Wars design team fulfilled the stuff of fan dreams when they launched 75313 AT-AT, the latest entry in the Ultimate Collector Series. Blocks magazine tests out the set in Issue 87 as well as covering the London midnight opening that celebrated its release. There’s also a look at the new Ahsoka Tano BrickHeadz set, the 150th character in the series.

Reviews also offers a look at 10297 Boutique Hotel, the new modular building that continues the beloved collection with a Mediterranean vibe. Find out whether it’s worth booking a stay at the latest minifigure accommodation.

Plenty of exclusive interviews are packed into this month’s edition, including an extended conversation with LEGO Ideas Design Manager Sam Johnson. He has an inspiring story about landing his dream job as well as stories from more than a decade at the LEGO Group that give real insight into what it’s like to work in Billund.

The Hageman brothers discuss their first involvement with the brick, back when they wrote the original treatment for The LEGO Movie. LEGO House CEO Jesper Vilstrup provides an update, teasing a new attraction and taking about what’s going on at the Home of the Brick.

Anyone who has ever felt the need to justify their LEGO hobby can point friends and family towards this month’s feature on adult play. It confirms what all sensible people already knew – play is good for you and experts say so.

Blocks is giving away 75313 AT-AT! To be entered into the prize draw and to get Blocks Magazine delivered every month – ahead of the shops – visit www.blocksmag.com and check out the money-saving subscription deals available.

Everyone who subscribes to the print edition by February 2 will be in with a chance of winning (existing subscribers will automatically be entered into the prize draw).