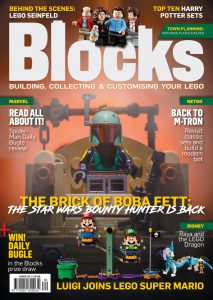 In Blocks magazine Issue 82, the new Boba Fett LEGO minifigure gets a throne, there’s a review of the epic Spider-Man 76178 Daily Bugle set and you can find out everything you need to know about Luigi joining LEGO Super Mario.

Blocks magazine Issue 82 is available worldwide as a single issue or as part of a subscription at www.blocksmag.com and will be in UK stores from August 5th. Subscribe today to be in with a chance of winning the towering Marvel 76178 Daily Bugle!

Following his Stormtrooper smashing, transport destroying, armour painting re-entry into the Star Wars story, Boba Fett is back with a new minifigure. The only thing Blocks could think to do was build a throne for the bounty hunter, ready for The Book of Boba Fett later this year. There are also reviews of the new Star Wars: The Mandalorian sets – this is no spice dream.

Beyond Star Wars, Reviews also covers 76178 Daily Bugle, 76188 Batman Classic TV Series Batmobile, new LEGO Super Mario sets and Raya and the Last Dragon models. The latest VIDIYO releases are assessed too – did this theme finally start getting it right just as it’s about to wind down?

It’s not just reviews that tell you about new sets though – the LEGO designers behind them give fantastic insights into how they came to be. Fan designer Brent Waller joins LEGO design gurus César Soares and Crystal Fontan to discuss how their combined Seinfeld super fandom translated into a LEGO Ideas set that packs in every reference possible from the genre defining sitcom.

As for Luigi, he is jumping into LEGO Super Mario and bringing two-player gameplay with him. The design experts behind the experience explain how he works, what co-operative play adds to the game and even share some tips for earning extra coins.

Going retro, this edition of Blocks takes a look at the winding route that LEGO roads went on to go from flat boards to the new elements, before revisiting the beloved Space subtheme M-Tron with reflections on classic sets as well as instructions to build a modern robot.

There’s plenty more besides in Issue 82’s 116 pages, including the inside scoop on recycled bricks, top 10 Harry Potter sets, micro ship building tips, a LEGO Clone Wars model you’ve forgotten, a rant about digital instructions and much, much more.

Blocks is giving away 76178 Daily Bugle this month! To be entered into the latest prize draw and to get Blocks magazine delivered every month – ahead of the shops – visit www.blocksmag.com and check out the money-saving subscription deals available.

Everyone who subscribes to the print edition by September 1 will be in with a chance of winning (existing subscribers will automatically be entered into the prize draw).