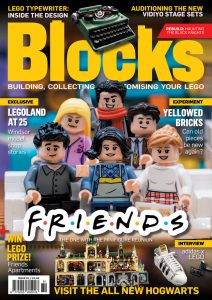 Issue 81 is a packed edition of Blocks, the LEGO magazine for fans. There’s a review of 10292 The Friends Apartments, a celebration of LEGOLAND Windsor’s 25th anniversary and an experiment in de-yellowing LEGO bricks.

Blocks magazine Issue 81 is available worldwide as a single issue or as part of a subscription at www.blocksmag.com now and will be in UK stores from July 1. Subscribe today to be in with a chance of winning 10292 The Friends Apartments.

Could Blocks BE any more excited for 10292 The Friends Apartments? The set review is illustrated by photography showcasing classic moments from the series, recreated using the set and the LEGO characters found within. Forget the real-life reunion, it’s all about the James Corden free minifigure reunion.

This month’s epic exclusive is an oral history of LEGOLAND Windsor, to mark the theme park’s 25th anniversary. Did you know that the LEGO Group set up a workshop in Windsor to share the model building load with Billund? The people who were there reveal just how they went about getting things ready for the first park outside Denmark.

There’s more behind-the-scenes insight to be found beyond that, with the creatives behind 10282 adidas Originals Superstar and 21327 Typewriter explaining how they took these real-life objects and recreated them using the LEGO system. As if that isn’t enough, there’s also a look at the development of Marvel 76178 Daily Bugle, the epic Spider-Man set.

It’s time to put on safety goggles and a white jacket as Blocks goes into the lab for an experiment – can old bricks be returned to their original glory once they have yellowed? Don’t sacrifice any bricks until you’ve checked out the results of this experiment.

Blockstalgia is turning back the clock to the era of the Black Knights, the Castle subtheme that opted for a Batman style black and grey colour palette. Black Monarch’s Ghost is the classic set that gets an upgrade, looking significantly spookier as an exclusive, reimagined model.

Blocks is giving away 10292 The Friends Apartments this month! To be entered into the latest prize draw and to get Blocks magazine delivered every month – ahead of the shops – visit www.blocksmag.com and check out the money-saving subscription deals available.

Everyone who subscribes to the print edition by August 4th will be in with a chance of winning (existing subscribers will automatically be entered into the prize draw).