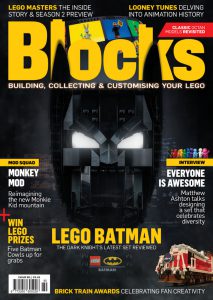 Issue 80 of Blocks Magazine, the magazine for LEGO fans, goes behind-the-scenes of 40516 Everyone is Awesome with Matthew Ashton, reveals how LEGO Masters went global and delves into the history of Looney Tunes.

Blocks Magazine Issue 80 is available worldwide as a single issue or as part of a subscription at www.blocksmag.com now and will be in UK stores from June 6th. Subscribe today to be in with a chance of winning one of five 76182 Batman Cowl sets.

This issue also coincides with the launch of the entire Blocks digital back catalogue, which is now available to all print subscribers. That archive contains every single magazine ever published, including the rare pilot edition and Issue 1.

LEGO 40516 Everyone is Awesome is arriving for Pride month to celebrate the LGBTQIA+ community and we are talking to the set’s creator – Vice President of Design Matthew Ashton, who in an exclusive Q&A reveals how he came up with the concept and designed the model.

We also speak to LEGO Masters Executive Producer Steph Harris, who gives us a taste of what we can expect in the second US season and reveals how the series went from a concept for British television to a global juggernaut.

To celebrate the new Looney Tunes Collectible Minifigures, we present a series of brand new, exclusive images and hear from animation historian Jerry Beck. He knows everything there is to know about Bugs Bunny and friends, so is the perfect person to explain the history of these beloved characters and suggest why they have endured so well.

As ever there’s a wealth of creativity to be found within Blocks Magazine Issue 80, starting with a guide to rebuilding 80024 The Legendary Flower Fruit Mountain as an Islanders paradise. Over in the Technique section there are tips and tricks for putting together vegetable patches and there’s also a look at winning entries from the Brick Train Awards.

This is just a taste of what’s in store within the 116 pages, which also include regulars like Reviews, Ideas Showcase, Month in MOCs, This LEGO Life, From the Vault and LUG Spotlight, plus a run-down of the new summer sets.

Blocks is giving away five LEGO 76182 Batman Cowl sets this month! To be entered into the latest prize draw and to get Blocks Magazine delivered every month – ahead of the shops – visit www.blocksmag.com and check out the money-saving subscription deals available.

Everyone who subscribes to the print edition by July 1st will be in with a chance of winning (existing subscribers will automatically be entered into the prize draw).