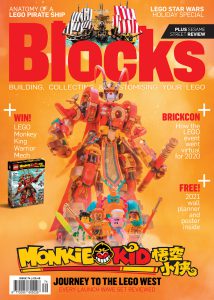 Get in the Christmas mood with Blocks magazine, available to order now and in UK shops from December 3. This edition of the magazine includes a free 2021 wall planner, which features every Blocks magazine cover on the reverse.

Issue 74 includes a look at the best gifts for Christmas 2020, a review of the charming Winter Village Elf Clubhouse set and exclusive insight into the making of The LEGO Star Wars Holiday Special. Lucasfilm’s Josh Rimes reveals how it is destined to be something more beloved than its 1978 namesake.

With those big holiday and January sale purchases imminent, there’s a bumper Reviews section this month, covering the epic LEGO Monkie Kid to see whether this theme aimed at consumers in China has broad appeal. There’s also a detailed look at a US television classic – 21324 123 Sesame Street, the LEGO Ideas set that captures the beloved childhood show. For Star Wars fans, 75290 Mos Eisley Cantina and 75318 The Child are also covered – do they live up to their reputations for wretchedness and cuteness?

As both 31109 Pirate Ship and 21322 Pirates of Barracuda Bay have set sail this year, there’s no better time to measure up the various LEGO vessels that have sailed the brick seas over the decades. Blocks magazine delves deep into what makes a LEGO pirate ship to see how they have evolved over time, going all the way back to 6285 Black Seas Barracuda.

There’s another blast from the past in Blockstalgia, although this one might not be quite as fondly remembered. Known as Dino Attack in the US, or the more sedate Dino 2010 in Europe, it’s one of the strangest LEGO themes ever released. Re-build tackles the bizarre mutant T.rex, revealing how to recreate it using bricks.

Along with regulars including Month in MOCs, Piece Perception, Technique, Rebuild Challenge and Ideas Showcase, there’s a report from this year’s virtual BrickCon, the top 10 LEGO sets inspired by history and everything you need to know about the LEGO Group’s China strategy.

Be in with a chance of winning one of four 80012 Monkey King Warrior Mech sets! To be entered into the latest prize draw and to get Blocks magazine delivered every month – ahead of the shops – visit www.blocksmag.com and check out the money-saving subscription deals available.

Everyone who subscribes to the print edition by January 1 will be in with a chance of winning (existing subscribers will automatically be entered into the prize draw).