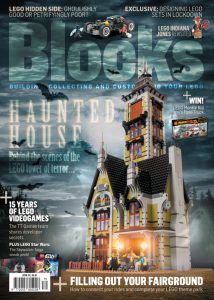 It’s a packed issue of Blocks magazine this month, available now at www.blocksmag.com and in UK shops from August 6th, headlined by an epic look back at 15 years of LEGO videogames with the people who made them.

Issue 70 also includes a deep dive into the creation of the new Haunted House set with Design Manager Jamie Berard, who shares a look at sketch models and development builds, plus tips on making all of those fairground rides fit together seamlessly in a layout.

In an exclusive feature as epic as the games themselves, 15 years of LEGO videogames looks back at every single LEGO game that has come from TT Games since Star Wars set the trend in 2005. Head of Design Arthur Parsons and four of his talented colleagues share unique insights, reflections and behind-the-scenes secrets as they look at the development of the games over the years, from Harry Potter to Marvel’s Avengers and everything in between. They even provide a sneak peek at LEGO Star Wars: The Skywalker Saga.

Physical bricks are never far from the Blocks crews’ minds though, with attention turning to the incredible Haunted House that recently launched in the Fairground Collection. As well as reviewing the set, Blocks sits down with Design Manager Jamie Berard to find out about the collaboration that went into designing this incredibly tall model. There are images showcasing the various sketch models and prototypes that the design team built, too.

With so many fairground and theme park ride sets now released, what’s the best way to set them up in a layout? A special feature looks at just that, showing how to build complementary models such as a ticket booth, entrance, shooting gallery and walkway. It’s not this issue’s only building guide, with Technique revealing how to put together attractive display bases.

As much as the LEGO hobby is a distraction from the outside world, lockdown has been happening – and now that he’s back in the office, Model Designer Milan Madge reflects on his experience designing a really, really big set away from the LEGO Group’s resources. Working from home might be tricky for anyone, but it’s all the more so with thousands of LEGO bricks to accommodate.

If nostalgia for LEGO themes had a name, it would be Blockstalgia. In this month’s edition, Blocks takes a look at Indiana Jones’ memorable appearance in the brick. Spotlighting three classic sets from the theme and introducing three new vignettes – one for each of the first three films – it’s a celebration of the whip-cracking archaeologist that belongs in this magazine.

The 116 pages of Blocks Issue 70 are rounded out with a guide to LEGO Super Mario, reaction to LEGO Art and an interview with the designers of the exclusive LEGO House Wooden Duck. All of the regulars are in there too, including Top Ten, Month in MOCs, Rebuild Challenge, Ideas Showcase and Piece Perception.

LEGO Monkie Kid [80009] Pigsy’s Food Truck is up for grabs for Blocks subscribers. To be in with a chance of winning and to get Blocks magazine delivered every month – ahead of the shops – visit www.blocksmag.com and check out the money-saving subscription deals available.

Everyone who subscribes to the print edition by September 1st will be in with a chance of winning (existing subscribers will automatically be entered into the prize draw).